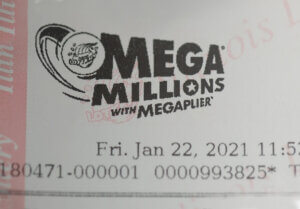 New York is often labelled the city where dreams are made of, and this statement couldn’t be further away from the truth for one lucky resident at least. On Tuesday February 16th, the Mega Millions was draw and its jackpot of $96million was attracting a lot of attention. White balls 1, 36, 44, 54 and 66, plus the gold Mega Ball of 10 altered the fortunes of a New York City ticket holder after discovering they had won the lot – and no sharing!

The winning ticket was purchased at Kinney Drugs located at 2 Preston St. Do you know the odds of winning the Mega Ball? It’s 1 in 302,575,350! And that lucky New Yorker was that one in almost 303 million!

We may only be two months into 2021, but that sum is the second largest won after some lucky devil won $1.050 billion almost a month before! It’s been revealed a total of 515,119 tickets holders all won a prize. That sum of $96million can be paid to the winner one of two ways: in increments or they can opt for a cash lump sum. Those opting for an instant pay out receive considerably less than they would over the entire lifetime of the instalments, but $68.5 million cash is still a lot of money!

What would you choose? Annuity where one instant payment is followed by 29 additional annual payments, each 5% bigger than the last or the one-off lump sum? A single ticket holder in California beat odds of 1 in 12,607,306 to take home February 16th second prize of $1,000,000 while a further nine players matched 4 white balls and the Mega Ball to scoop $10K each. Odds for tier three is 1 in 931,001! One of those tickets was worth $30,000 as it included the additional $1 3x Megaplier.

How to play online lottery?

Each ticket costs $2. Six numbers are required – five from the white of 1 to 70 and one from the gold – 1 to 25. You can choose your own numbers of opt for a lucky dip, which effectively takes the hard-work out of picking numbers! Prize values vary from with Mega Millions lottery from $2 for matching the Mega Ball to the jackpot for all five white and the Mega Ball. Thanks to Megapliers, the values of each of those tiers (except for the jackpot), can be boosted by as much as 5x! So, the $1,000,000 second tier prize on normal play would be $2million on 2x, $3million on 3x, $4million on 4x or $5million on 5x!

You can play Mega Millions in 47 localities: 45 states plus the District of Columbia and the U.S. Virgin Islands. The next drawing has been reset to an estimated $30million or $21million in cash.